When I visited the Belgian Center for Comic Strips in Brussels, the existence of another museum dedicated to Hergé in Louvain-la-Neuve came to my awareness. So I went there to complete my journey in the comic strips universe. It is a brand new museum, very clean and very instructive in a new renovated city. 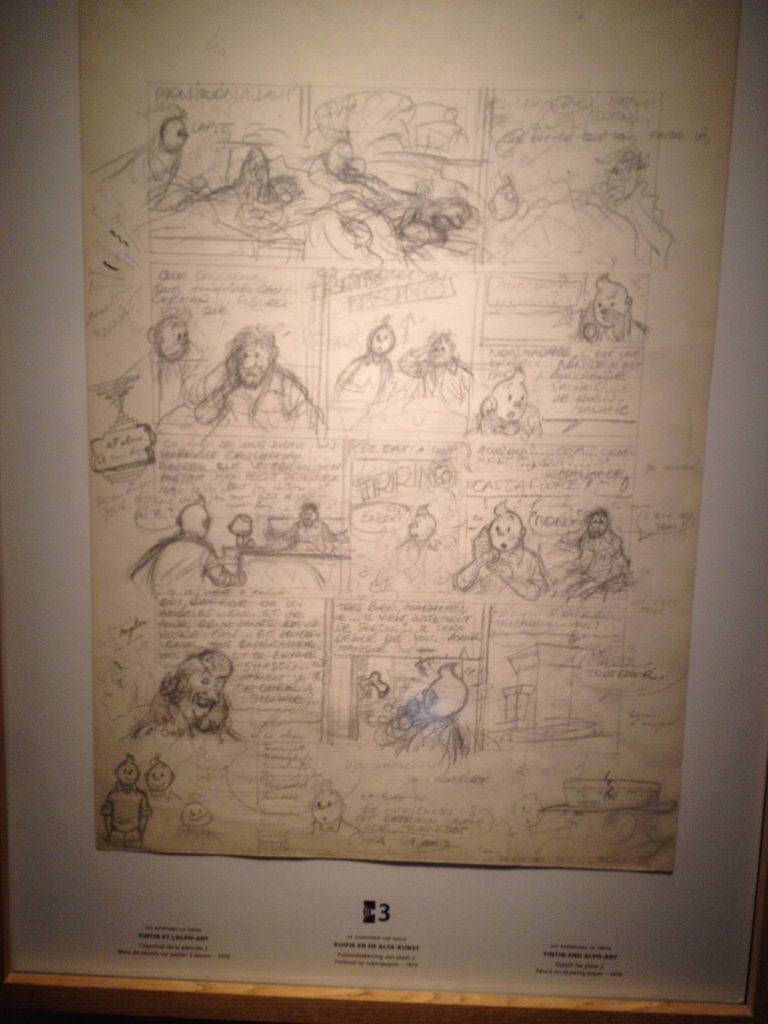 It was the weekend when I decided to go to Brussels for the very first time. The train fare was very cheap, only 6.5€ for the round trip from Leuven to Brussels. I walked from Brussels North train station to the museum for 15min, it was not too difficult to find. It is an old building located in a decadent part of Brussels with a lot of history. I really enjoyed the Belgian Centre for Comic Strip Art, I spent a total of 4 hours, and was impressed by the making of comics strip and the skills of artists. Below is an excerpt of Boerke, the style and the story are both simplistic and direct, but so funny ! 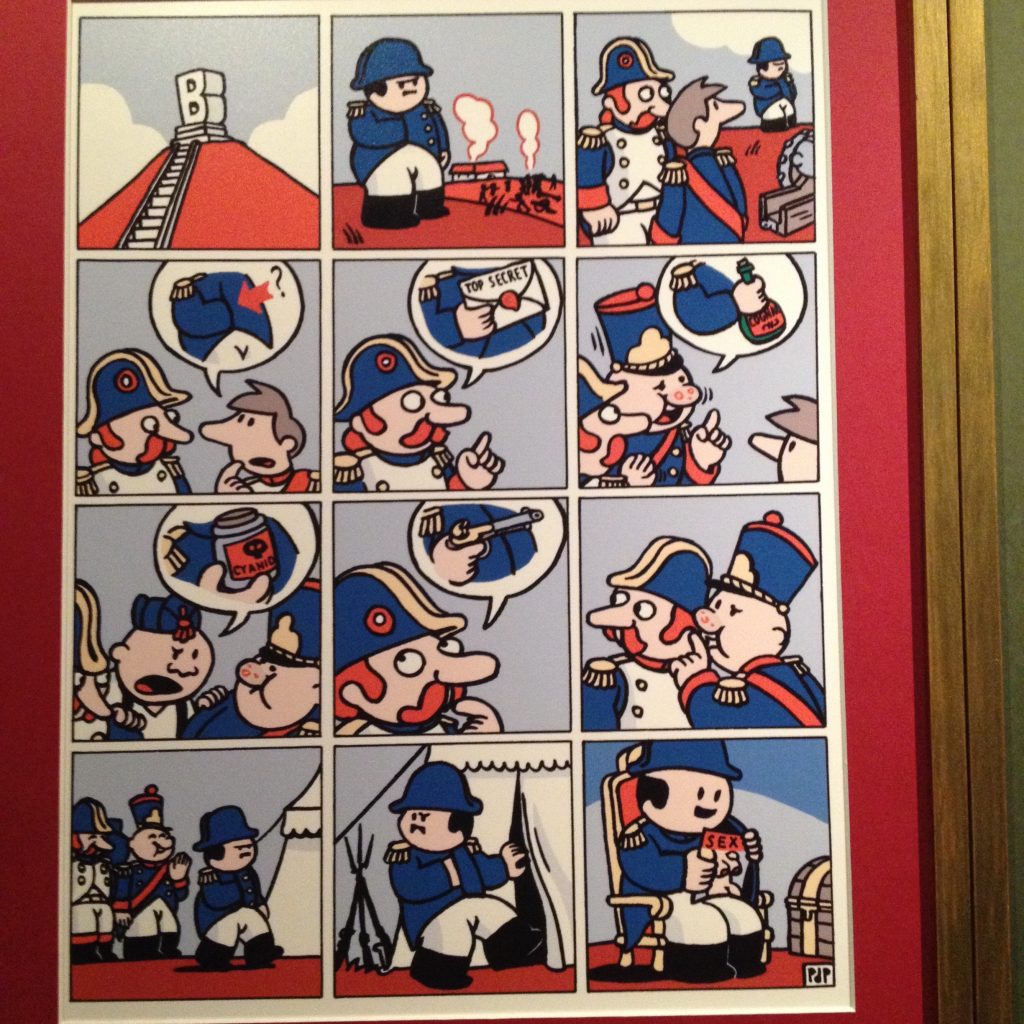 After clouds and showers, back to the beautiful weather with sunshine ! For this last part of unvisited area around Leuven, I took the N19 starting from the ring of Leuven to Wilsele, Putkapel, Wezemaal, reaching the outskirts of Aarschot, then turned right to take the circular road and the left to enter the N10, heading to Lier via Begijnendijk, Pijpelheide, Goor, Heikant and Koningshooikt. Near Lier, I took the circular road on the left, took another left for the N14 to Mechelen via Duffel and Elzenstraat. At Mechelen, I reached the circular road and took the N26 back to Leuven. 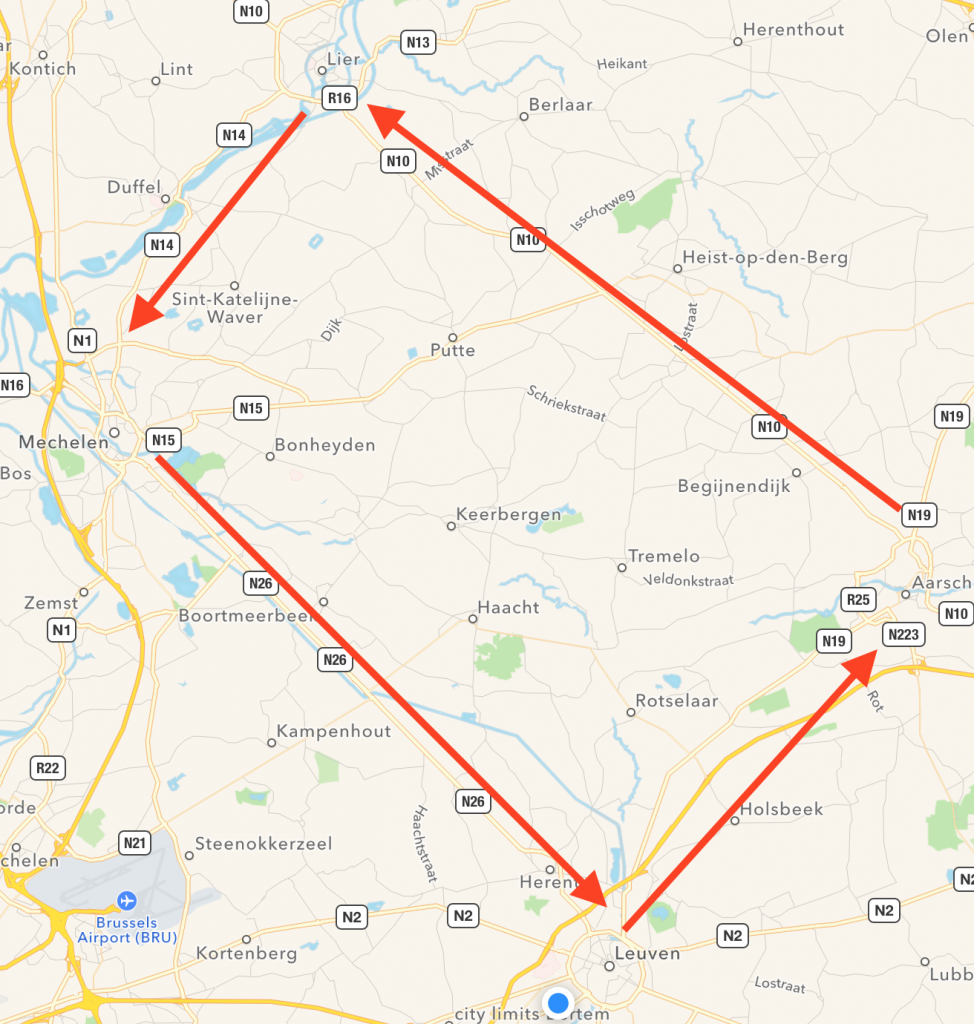 Nice weather, this Sunday morning, I could enjoy the ride starting from Leuven, and driving to Korbeek-Lo, Boutersem, and Roosbeek on the N3. Near Tienen, I took the N29, crossed Bumbeek, Glabbeek, Kapellen, Molenbeek-Werksbeck. Just before the E314, 2 times on the left and I switched to the N2, going back to Leuven through Bekkevoort, Sint-Joris-Winge, Sint-Bernard, Linden and finally Kessel-Lo. 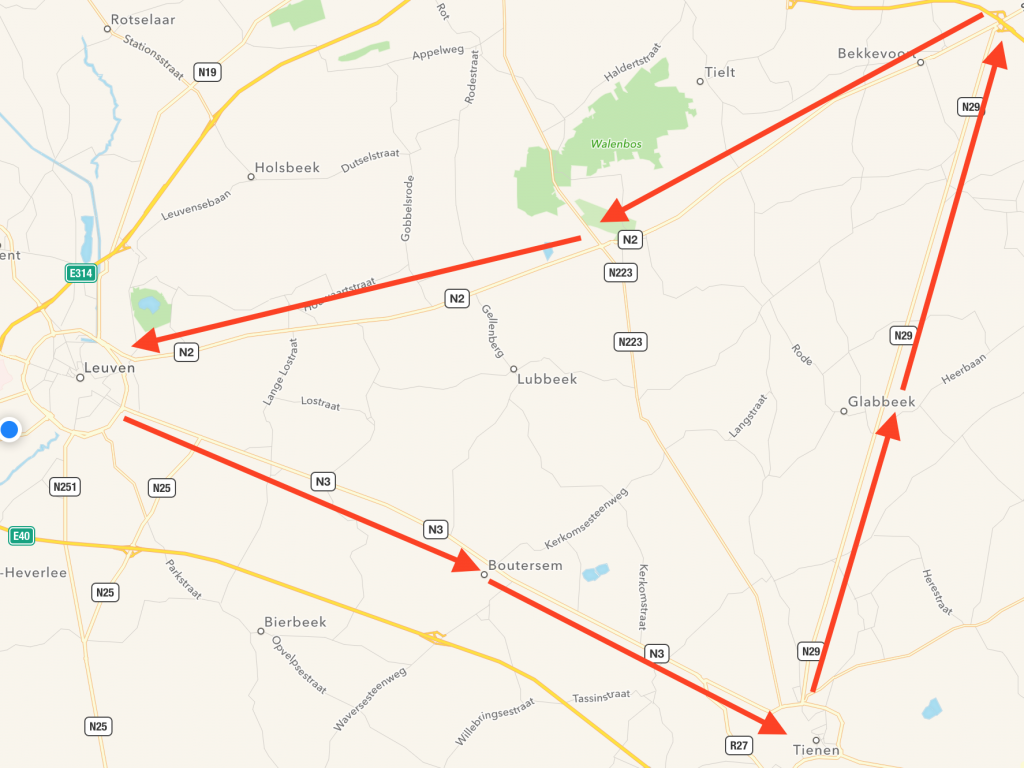 This beautiful triangle has a perimeter of 81km ! Around 60min

I took the N3 from Leuven, straight to Bertem and Tervuren, where stands the Royal Museum of Central Africa (unfortunately closed for renovation until 2018). I then took the N227 up to Nossegem, then switched to the N3, going back to Leuven. 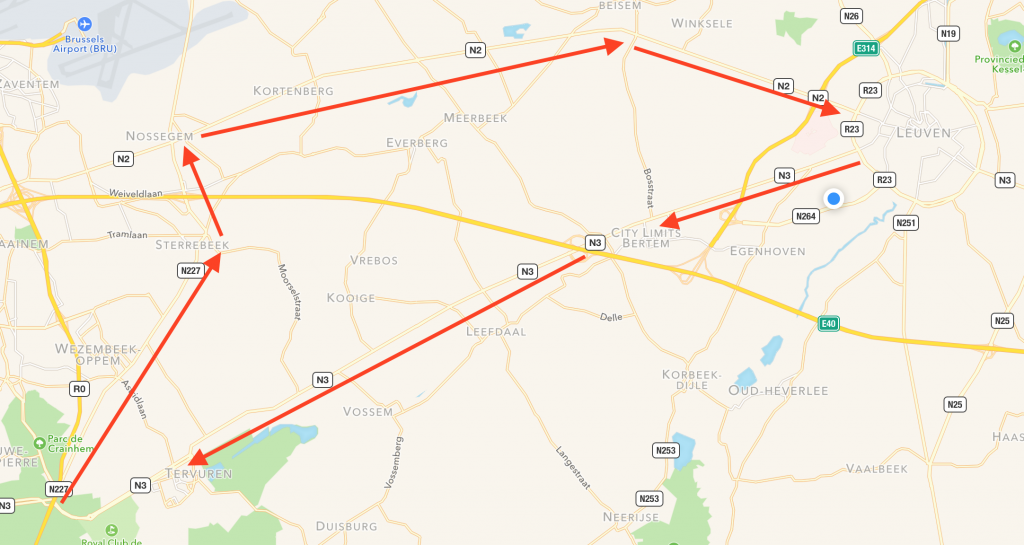 After stormy weather conditions these last days, the weather finally did improve, so I could leave Heverlee on the N253 to Overijse, turned on the left to join the N4 to Wavre. Near Gembloux, I selected the N29, took the left again at Jodoigne to join the N240 and the N91 to reach Hamme-Mille so as to close the loop. 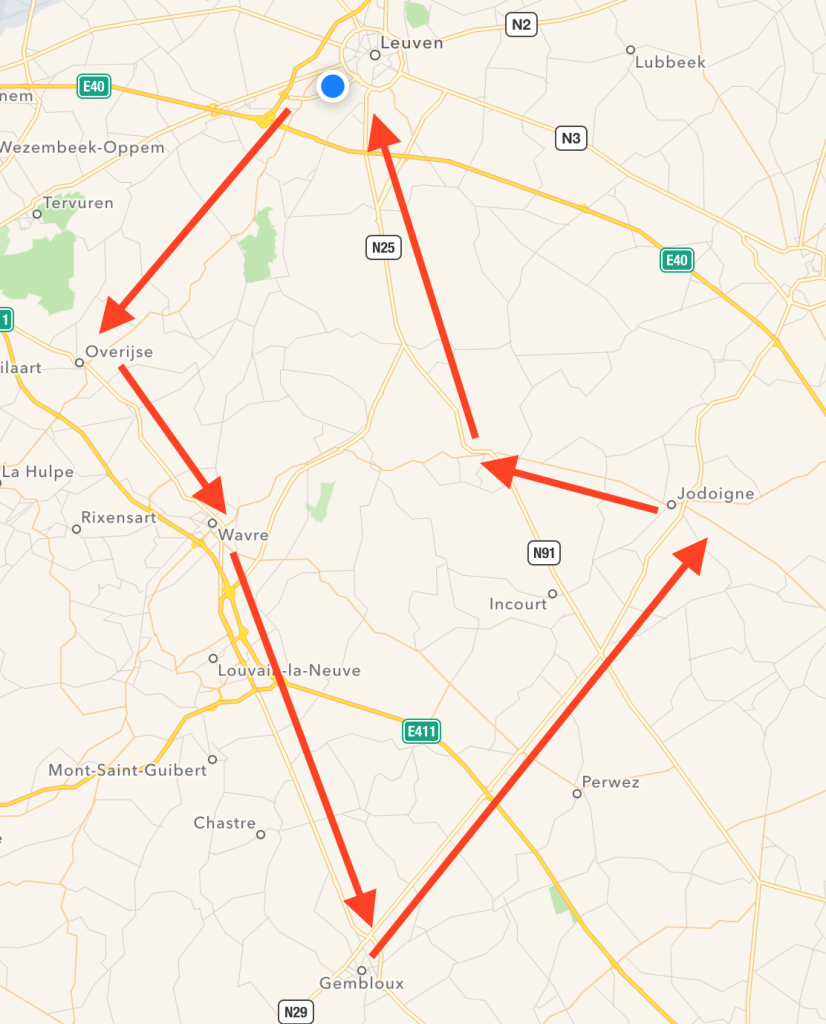 Closing the loop from Heverlee to Gembloux; 40km, 45min

For my second road trip in Belgium, I went to Hoegaarden. 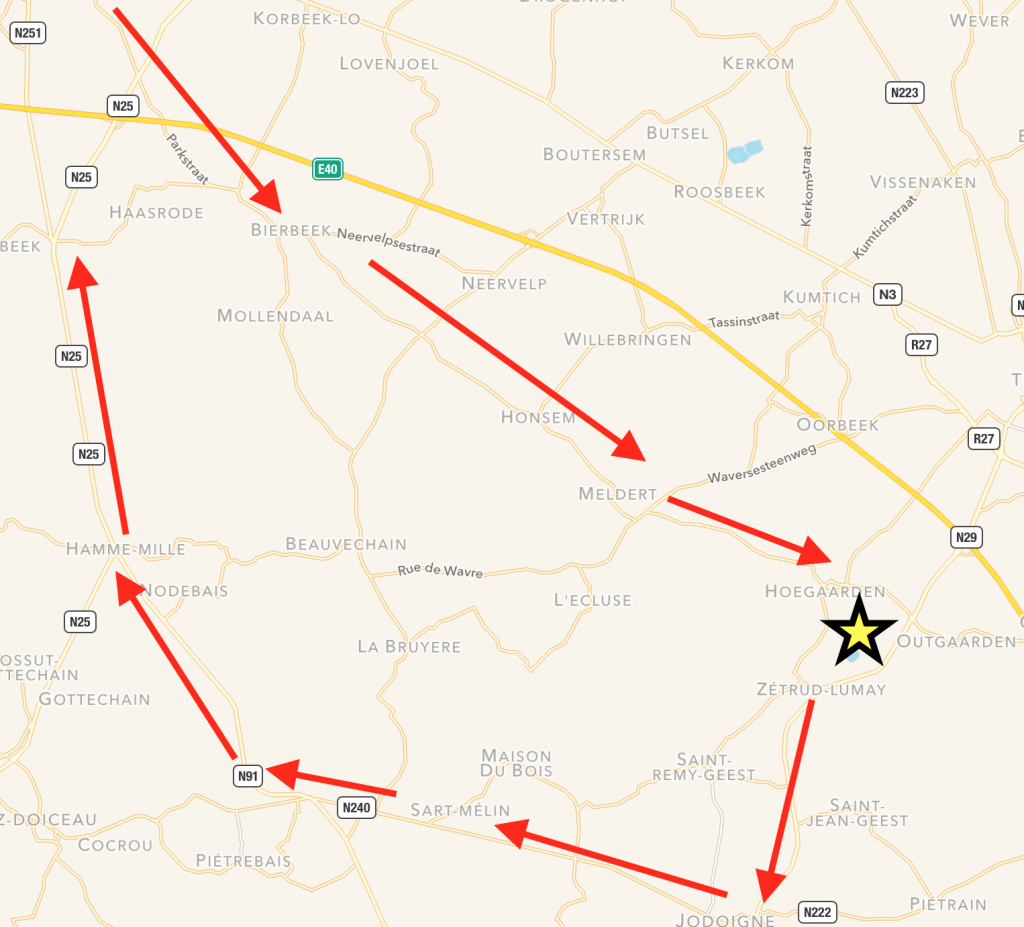 From Leuven to Hoegaarden via secondary roads, 25km, 35min

I started my trip today on the ring road on the South part of Leuven, took the right just before Phillipsite, crossed the railway, the N25 and the E40, before reaching Bierbeck, Opvelp, Meldert and finally Hoegaarden where the famous beer is produced. It is a very small town, and the brewery was not so hard to find ! 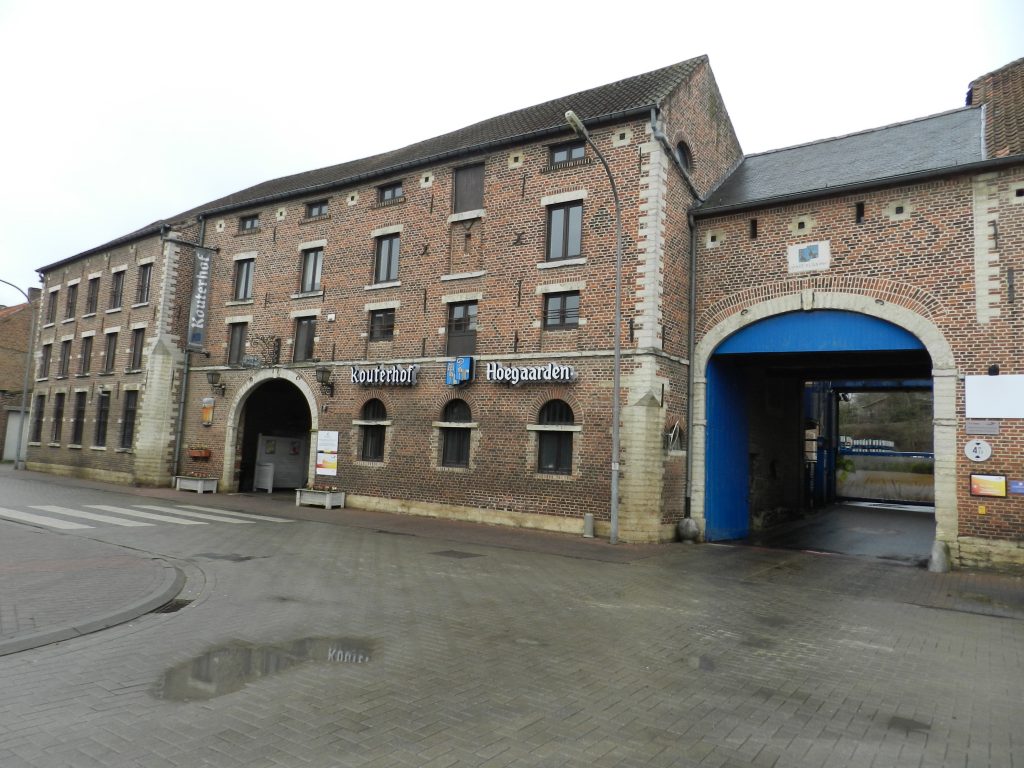 Behind the restaurant Kouterhof, the brewery can be visited

For my very first road trip in Belgium, I left Heverlee and followed the N253, which is a scenic road that crosses several villages and small towns in the countryside: Egenhoven, Neerijse, Loonbeck.

From Huldenberg to Overijse, there is a nice little lake along the right edge of the road. I kept driving to Maleizen, then La Hulpe, Hannonsart, Ohain, Ransbeche, and finally Waterloo, where I visited the battlefield.

The museum was an excellent opportunity to take a break. I learned about the French Revolution, the rise and fall of Napoleon, and watched a very good 3D movie about the battle of Waterloo. Outside, I climbed the stairs on the hill (40m) which led to the statue of a lion, erected here as a memorial and the symbol of the return of peace in the world with the end of the Napoleon era. From there, I could enjoy the panorama since the weather was pretty sunny, with only very few clouds.

La Butte au Lion, erected at the beginning of the 20th Century